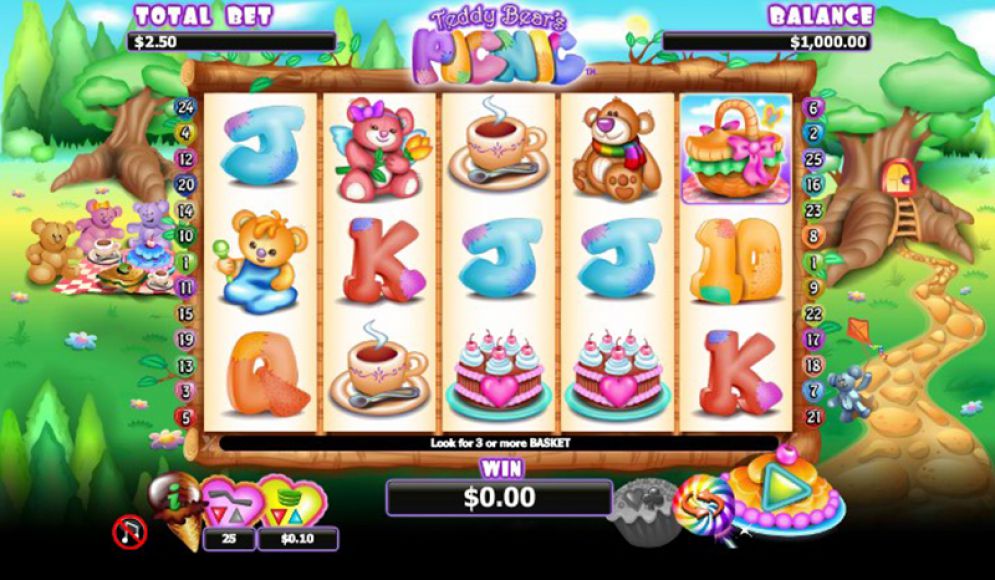 The children’s song Teddy Bears Picnic may seem like a strange theme for a slot game, and it probably is. The Teddy Bears Picnic slot game, created by Next Gen, is one of the stranger slot games you’ll ever play. It bursts at the seams with adorable characters, cute music, and a healthy dash of fluffy teddy bears. Why the theme was chosen is a mystery, but there is simply no denying that it has been pulled off with an immense amount of passion.

The background image is alive with fluttering birds and butterflies, and each spin of the reels is accompanied by a charming rendition of the Teddy Bears Picnic song. Occupying the reels is a family of teddy bears, each more delightful then the next. And if this wasn’t enough, even the user interface is stylised to appear as items of food the teddy bears are enjoying at the picnic. It’s almost too much to bare, excuse the pun. So, if you’re a fan of cute, you’re in for a treat. But what about the actual game?

The Teddy Bears Picnic slot game uses a 5 reel, 25 betting line system, which is fairly standard. The real money online pokies lines are manually adjustable, which is a plus for strategic players, and a gamble option allows adventurous players to potentially double each win. It’s all rather basic, with nothing standing out as out of ordinary or revolutionary.

The symbol designs of the Teddy Bears Picnic slot game are, as has already been stated, largely aimed at being 100% cute. Daddy bear, recognisable by his multi-coloured scarf, is the most valuable standard symbol, followed by mommy bear and baby bear. Mommy and daddy will match a maximum of 5 times and minimum of 2 times, with baby able to match only a minimum of 3 times. It’s all very simple and easy to understand.

There are two bonus symbols in the Teddy Bears Picnic slot game, a wild symbol and a scatter symbol. The wild symbol is depicted as honey, which everyone knows bears love. It will match with all other symbols to create a winning sequence, and also with itself up to 5 times or a good jackpot payout. The scatter symbol is shown as a picnic basket, which Yogi Bear would confirm is the second thing bears love. If matched 3 times the scatter symbol will grant 8 free games, with wild symbols sticking in place if landing on the reels during any spin.

In conclusion, the Teddy Bears Picnic slot game is a standard affair that stands apart only for its incredibly well realised, but odd, theme. This is not a bad thing, and the majority of slot game players will quickly understand the rules of the game, and be able to sit back and enjoy the audio and visual experience. Those looking for something new and interesting in the game play department, however, will have to look elsewhere. Now try getting the Teddy Bears Picnic song out of your head after playing this for an hour.

Making use of an application to play online poker games on tablet will require that the player opens an account with the casino to which the application belongs. Should he or she already have an account, but be unable to…
END_OF_DOCUMENT_TOKEN_TO_BE_REPLACED